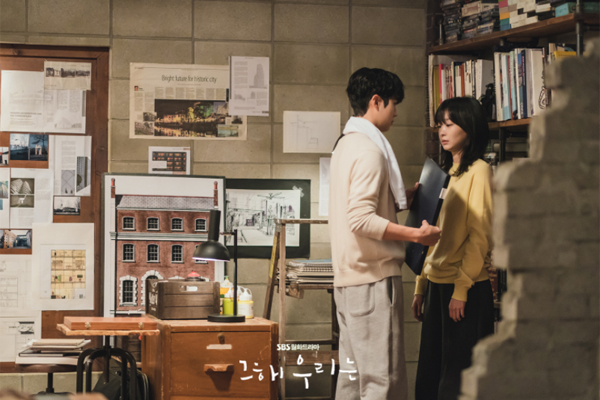 “Love-Hate Relationship” of the Two

Choi Woong and Kook Yeon Soo were brought back together for a business and a remind-documentary. Like how Kim Ji Woong (Kim Sung Chul) once said, “It’s a thin line between love and hate,” the two opened the second chapter of their romance of love and hate. The scene where Choi Woong sprays water and salt on his ex Kook Yeon Soo, who showed up five years after their breakup, was childish yet frank. Despite being thrown water and salt at, she had no other choice but to put on a smile for a business. Like this, Choi Woong and Kook Yeon Soo continued their bitter love and hate relationship.

Choi Woong was mad at Kook Yeon Soo for being “nonchalant,” and Kook Yeon Soo couldn’t say anything as she realized his misunderstanding and resentment. And the two suffered the aftereffect of their reunion even more as time went on. They were thrown into the world of chaos as the emotions they’ve been repressing started to sneak out. All of this started with Choi Woong. He visited Kook Yeon Soo’s house late at night and conveyed his sincerity with tears, and even kissed her out of the blue in a place where they visited to film the documentary. The pain, regret, and lingering affections they had were all poured out at once.

Their relationship that we thought would move forward after the kiss has only been stagnant. Feeling annoyed about Choi Woong not calling her, she visited his house after having too much to drink. However, by that time, Choi Woong had decided that he didn’t want to date Kook Yeon Soo again but couldn’t live without seeing her. Denying his feelings for her, he suggested she be his friend. Though she seemed baffled at his suggestion, she felt a part of her heart breaking. Her narration – “Guess I’ve never forgotten Choi Woong” followed out as she shed tears in her grandmother’s arms, hinting at her “awakening.” On top of that, Kim Ji Woong and NJ (Roh Jeong Eui)’s crush have only gotten deeper, raising curiosity over their relationships.